When is the best time to fly to Santa Rosa?

With high temperatures and low rainfall, one of the best times to visit Santa Rosa is between the months of April and October. This is peak travel season and prices for both flights and hotels are likely to be at their highest.

The months of September and October are known as ‘crush’ season in Santa Rosa as this is when the grapes from the nearby Napa and Sonoma Valley wineries are harvested and pressed. Visiting at this time of year provides a fantastic opportunity to see the wineries in action which can add to the enjoyment of any tour, though this contributes to making this a popular time of year to visit Santa Rosa. Wear layers and be prepared for crowds.

September and October are also the months when many business conventions take place in nearby San Francisco and this can have a knock-on effect on the availability of flights and hotel rooms in Santa Rosa. November is a good time to visit as all the peak season crowds will have departed and the weather is still warm enough to enjoy walking around. Travel and accommodation in Santa Rosa at this time of year is likely to be significantly cheaper. December, January, February and March (with the exception of the Christmas and New Year holidays) are the low season. This is a good time to find bargains, but facilities in Santa Rosa may be limited or operate on a schedule of reduced hours.

When is the best time to book flights to Santa Rosa?

The best time to book flights to Santa Rosa is 60 days before your desired departure date. The cost of your flight will likely increase significantly if you book two weeks in advance of your flight.

Which day is cheapest to fly to Santa Rosa?

The cheapest flights to Santa Rosa are usually found when departing on a Tuesday. The departure day with the highest cost at present is Sunday.

Santa Rosa flights can be made cheaper if you choose a flight at midday. Booking a flight in the afternoon will likely mean higher prices.

Santa Rosa is the gateway to Napa and Sonoma Valleys that form part of California’s wine country and is therefore the perfect starting point for a tour. The city’s location also makes it hugely convenient for anyone wishing to drive along the stunning highways of the west coast, either down towards San Diego or up towards Seattle.

Fans of Charlie Brown and friends will especially love Santa Rosa. Though he was born in Minnesota, Charles Schulz, creator of the Peanuts cartoon strip, lived in Santa Rosa most of his life and the city is now home to an impressive museum celebrating his work. Santa Rosa also plays host to an annual festival and rose parade celebrating the work of noted botanist Luther Burbank. Other local attractions in Santa Rosa include a number of parks and Safari West – a 400 acre wildlife reserve that is home to hundreds of birds and mammals.

Getting around Santa Rosa

Though the central area of Santa Rosa is relatively compact, most of the city is somewhat suburban meaning by far the easiest way to get around is by car. The Santa Rosa CityBus is a low-cost alternative but offers only limited coverage. Car-free pathways exist from the centre towards the west of the city making cycling another transportation option.

Charles M. Schulz-Sonoma County Airport (STS) is located 7 miles (11 km) northwest of Santa Rosa but is only served by one airline that offers internal flights to other west coast locations. A range of taxies and shuttles are available to take passengers to and from this airport. Santa Rosa is 55 miles (88.5 km) north of San Francisco airport and shuttle buses are available. Travel time varies depending on traffic but is usually somewhere between one and two hours. 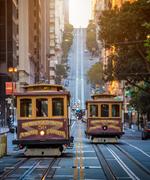